Where it all began

Allowing you to access the best and cleanest water from your well – along with the best service from us – is our passion. At Pure Water Well Inc., you’ll find that ‘pure water’ isn’t just the name of our business; it’s also our mission to you. With over 25 years in the drilling industry, we have the experience to handle all of your well needs.

Drilling Michigan’s wells for over 25 years

Richard Layman, Jr. is a 4th generation well driller. As children, Richard and his brothers worked for their father, Richard Layman, Sr. of B.W. Layman & Sons Well Drilling. Upon graduating high school, Richard married and moved to Northeastern Michigan. In 1989 Pure Water Well was open for business and Richard was excited to be helping the Northern Michigan community with their well and water needs.

It was not uncommon to see the Layman children working hard at the family business. Richard’s daughter Rachar was on the heels of her dad and grandfather learning everything she could about drilling wells. She soon became an active employee and Rachar earned her first real paycheck at the age of 11. Well-Drilling was in her blood and soon she stepped up as a leader and started running jobs at the age of 16.  Rachar became the 5th generation in her family to be involved in the family business.

In 2009 another family member became a part of Pure Water Well when Rachar married Jason who took a major interest in drilling wells. Jason finished his work study and became a licensed well driller in 2012 and became a major part of the business operations. 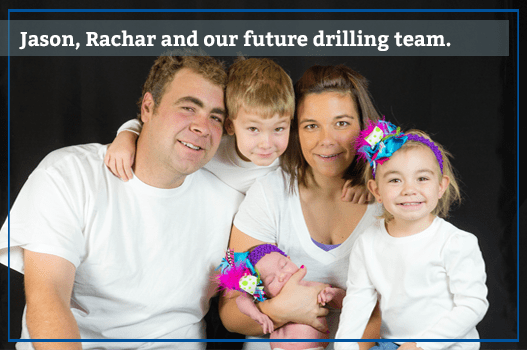 Now it is not uncommon to see Rachar and Jason’s children on the heels of their parents. They are the up and coming 6th generation of well-drillers, watching and learning the operations of the family business. They are still young, but they enjoy spending a lot of time with Grandma and Grandpa and Mom and Dad.

Working for our safe ground water.

Richard believes strongly in continuing education and being the best in his field. He has gone above and beyond the State requirements for his drilling registration. Richard is a licensed National Ground Water Well Driller, Mastering all of the tests and achieving his Master Ground Water Contractor’s Certification through the NGWA. Only a few well drillers in the state of Michigan have achieved this certification.

Richard has played a large part in the Michigan Ground Water Association, serving as Vice President of the Michigan Ground Water Association for 2 years before stepping in as President in 2013 until Fall of 2016. During this time, Richard worked with legislators, the DEQ, DHD, and well drillers all  over the state increasing the knowledge and working relationship of all involved. What does this mean to you as a customer? Richard will work hard to come up with answers to the difficult questions and projects. His efforts ensure that your ground water is safe for your family and for our future generations.

Jason has also started the process to receive his Master’s Certification test through the National Ground Water Association. Pure Water Well is a business that understands the importance of education and using the most current and skilled practices for safe well drilling.

Pure Water Well Inc. has been serving customers for over 20 years. What was once a small, local company now offers its services throughout Northeastern Michigan.

Serving All of Northeast Michigan

Weekend Hours:
By appointment only